ATTN CUSTOMERS: WATER USE RESTRICTIONS IN PLACE Read On... 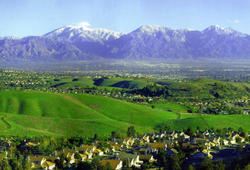 In July of 1998, Monte Vista Water District and the City of Chino Hills signed a long-term water supply agreement that provides up to 20.22 million gallons of water per day to the City.

Incorporated in 1991, Chino Hills found that it was dependent upon sources of water outside of its jurisdiction to meet its present and future needs. In 1996, the District began leasing 10 million gallons of water per day to Chino Hills. With owners of undeveloped land eager to develop residential, commercial and industrial projects, the City needed to secure additional sources of water supply to support this growth. Because the two agencies have contingent geography, the delivery of water from the District to Chino Hills is physically and economically feasible.

Initially, the District pumped the Chino Hills water deliveries to Ramona Feeder connection near the intersection of Philadelphia Street and Ramona Avenue in the City of Chino. In 2003, Chino Hills constructed a new 42-inch pipeline to connect to the District's water system at the intersection of State Street and Ramona Avenue in the city of Montclair. The District also made improvements at the site, including metering capability, and also constructed a new pipeline and several new wells to deliver water from the eastern portion of its service area to the interconnect location.

The revenue the District receives from Chino Hills through the agreement has been utilized to upgrade facilities and construct new groundwater production wells and other projects as outlined in the District's 30-year capital improvement program.

This partnership has enabled Chino Hills to meets its goals as a developing community and has also enhanced the District's capability of providing services to its retail customers as well as to assist its neighbor to the south. 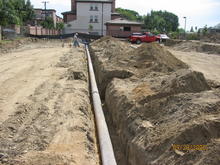